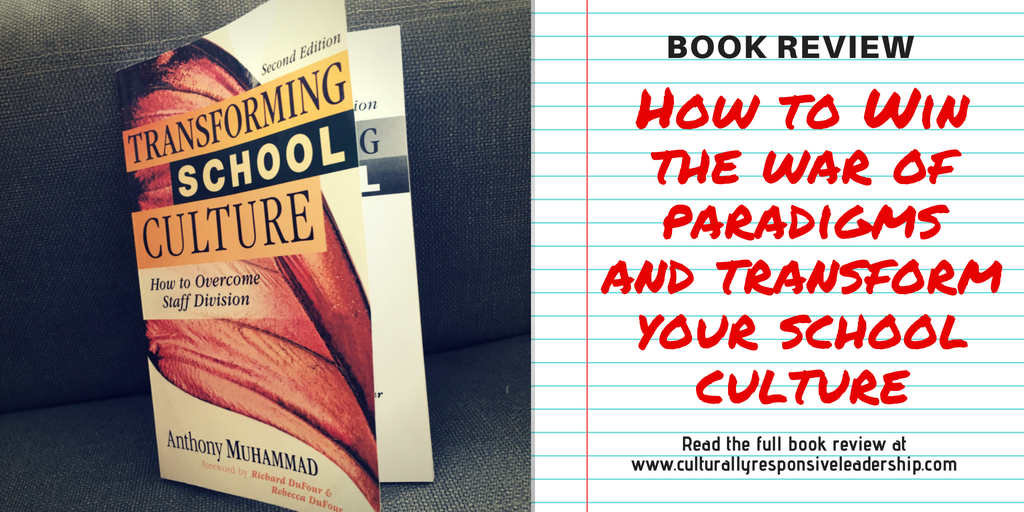 Bullets are flying, bombs are bursting, and the kids are the casualties. School Leaders are on the frontlines. The battle is for school culture, and ultimately the future of our students.

The opposition has been winning since John Dewey had his one-room schoolhouse. But, there is a way to tip the scale. You just have to know who’s in the platoon and which weapons are at your disposal.

Do you want to win the war?

I have felt like I was in battle, many times as a teacher in meetings, arguing about which discipline system to use, or as a teacher leader trying to get social justice issues in the curriculum. Now as a principal, I find myself in heated arguments, trying to advocate for high-quality education. Of course, we are fighting against a legacy of white supremacy, classism, and patriarchy. But, it shouldn’t feel like we are fighting against our own staff. But, sometimes we are.

So who’s on the battlefield? 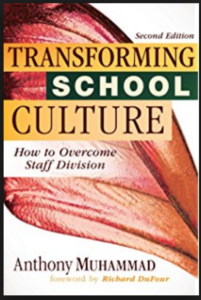 Brother Anthony Muhammad, in his book Transforming School Culture, categorizes teachers and staff, not based on their behavior, but based on their agenda and objective. They may show up in different ways, but this is about their motivation.

It is important to know where folks are coming from and what they are working towards. Truthfully, since this is about politics and philosophical agenda, this is all relative and depends on your stance. I am pretty radical, so I see fundamentalist working towards maintaining systemic oppression. They are the biased people that maintain an oppressive system.

If you are more moderate, that changes everything and everything for our students. I have always been a believer in possibility, in change, and in progress. I believed that I was capable of more than this racist society said. And I brought that belief into the field of education.

Ok, what can you do with each group of educators? 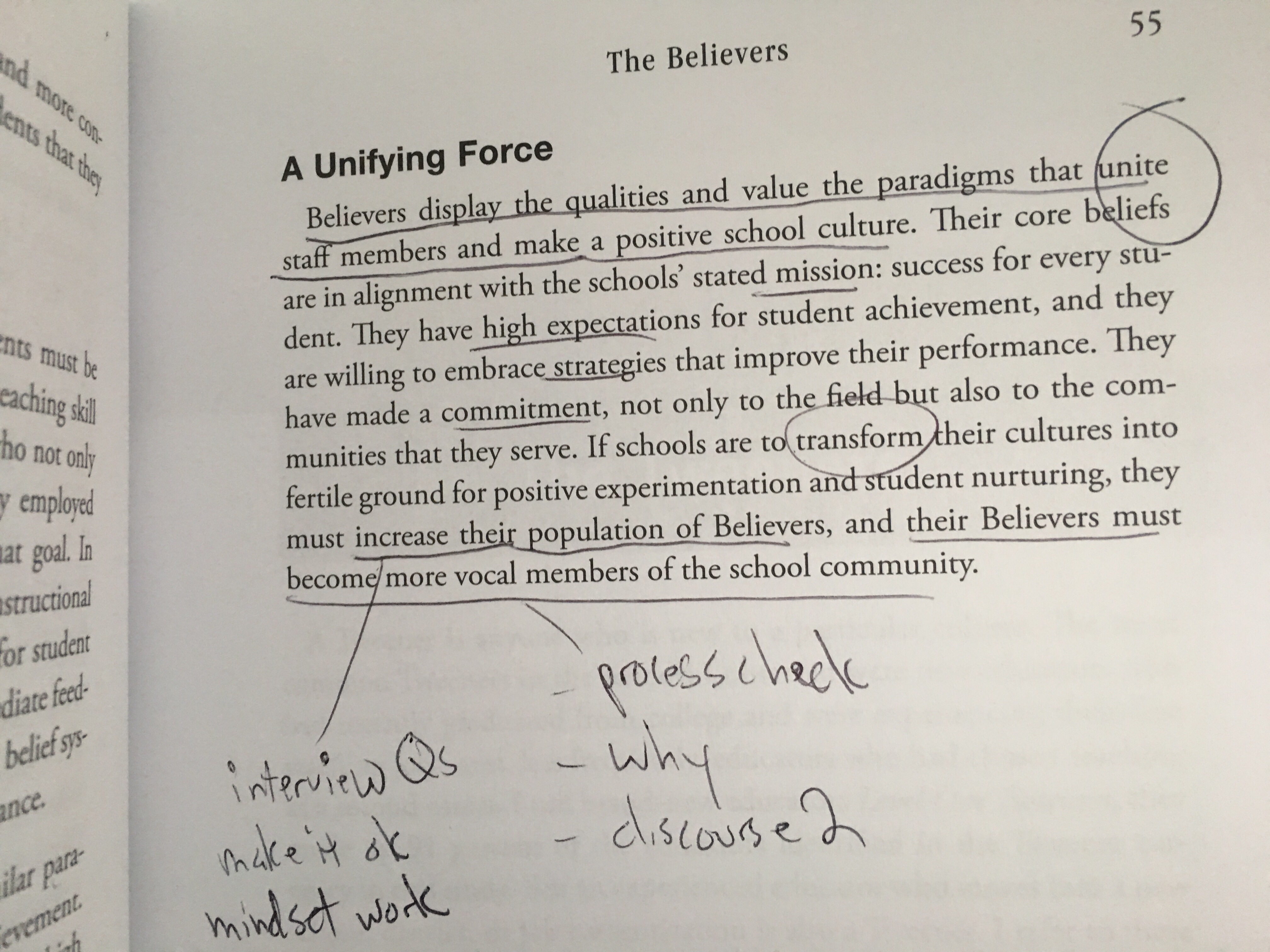 Your BELIEVERS are your bright spots!

Read up on bright spots and the Switch framework, and start to highlight their work. Give them the mic, tap believers for leadership, and empower them through leading PD. Also, visit their classes, and broadcast their/your beliefs. Your megaphone needs to cancel out the other fundamentalist message. Ask others to declare their beliefs through dyads, discussion, circles, and testimonies.  Share your beliefs. In short, let it be known. 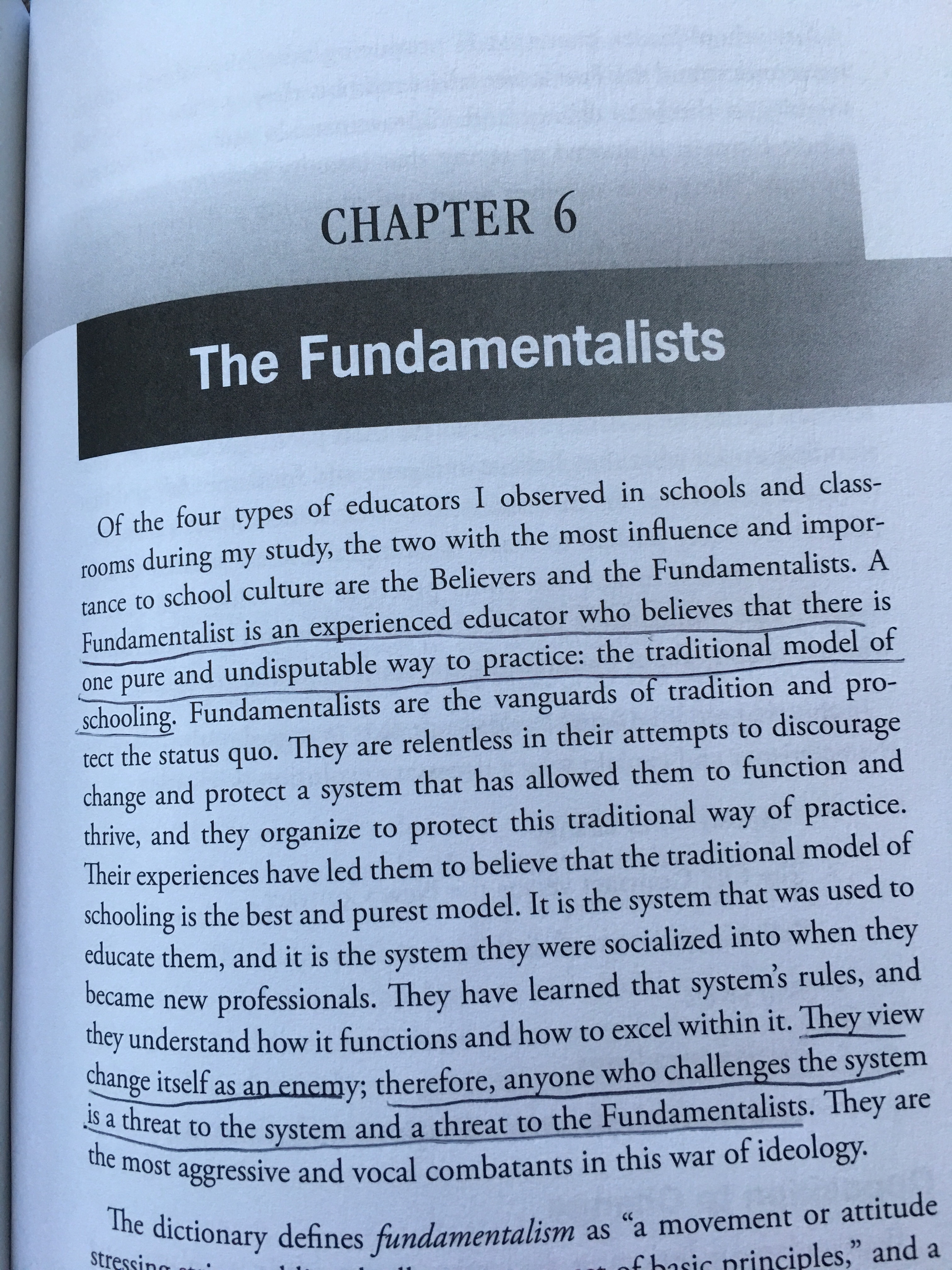 Fundamentalists “view change itself as the enemy.” Muhammad, writes, that transformational leaders should be prepared because fundamentalists will try to “defame you, distract others, and disrupt your work”. In response, you must “communicate clearly, build trust, build capacity, and hold them accountable.” It also helps to celebrate the positive culture and set up ways for staff to celebrate each other. This will combat that complaining, sideline hating, and sabotage of the fundamentalist.

I understand ‘micropoliticking’ to be informal and short conversations with people to surface issues, build relationships, and float ideas. Shane Safir might call this being a listening leader. To compliment this micro work, name and define equity in meetings, and establish it as the new status quo. Also, introduce and return to Discourse 1/2. Oh yeah, and outlaw Discourse 1. Make Discourse 2 a norm and ask your staff to observe and process check them. Invite Fundamentalists to be on leadership but you better have some good norms.

Bonus: figure out which person used to be a believer, and strategize how you can bring them back to the church of change and liberatory education.

Muhammad states that this is often a small segment, but I have seen larger amounts of survivors in underperforming schools that serve students of color. They been hiding out! I think one form of survivor is the one that is barely crawling through the days, and thy need support, coaching, or options to try something different. You want to minimize the damage to your students who are already struggling. They can survive somewhere students aren’t also surviving.

But the other more invisible type of survivor is the one that has found the sweet spot. The one between low expectations and low rigor. The person who allows phones when they know its not the rule. The one who always assigns simple worksheets because it’s easy and doesn’t put students into a productive struggle. That one who shows lots of movies and has free time. Sometimes, this survivor also gives kids lots of treats, candy, and prizes. Sweet spot. This person needs to be put on notice and supported if they are willing. You have to reach out to see what they need to improve, show them that success is happening right next door, with their same students, and push.

Fortify and Politicize your Tweeners

Muhammad talks about setting up both a new teacher support team and strong mentors for tweeners. He suggests, building a team that includes teachers, secretaries, and an administrator. Hard to do, but much needed. I suggest getting your staff invested in their success and to share the responsibility of supporting them. We cannot afford to lose any tweeners to the fundamentalist, nor can we afford them leaving the profession. I think an additional asset is a strong philosophical foundation.

Your tweeners could become your believers, but with an activist mentality, they can help raise the consciousness of your entire school. If they come in with or quickly form an identity similar to a community organizer, they will help you win the war of the minds. Meet with them first, micropolitics with them, and let them know that you need them to be teachers, organizers, and future leaders.

I used to attack the fundamentalists. Try to win the public battle. That cost me time and political cache. It is much more powerful to set the conditions for the believers to fight them in public and WIN.

I used to ignore the believers and focus on putting out the fires. This is necessary to a degree, but the believers give me and everyone else more energy. I need to learn from their bright spots and so does everyone else. Especially the tweeners. Bright spots put pressure on the fundamentalist.

Sometimes survivors and fundamentalist need permission to leave. This was a tip from my past supervisor. After we establish a vision, conditions for success, and invest time, its time to write a good recommendation letter. Also, lateral accountability goes a long way. The group can also re-norm the space so that people see that they do not belong.

It is possible to win the war. You must first know that it’s a war of the minds. If you know where everyone is at and build up your team, tap into your believers and nurture your tweeners, you can do it. You might be able to save a few survivors and fundamentalist. The students deserve this. Being moderate and non confrontational will not cut it. Be bold. Be a believer. Be a leader. Win the war.

So, who’s on your battlefield?